Geiger Brothers has completed replacement of the pedestrian bridge on the Chillicothe campus of Ohio University.

While the project was completed in August and the structure has been in use, campus administrators and Chillicothe city officials led a ribbon-cutting ceremony October 7 to officially “open” the new Shoemaker Center bridge to pedestrian traffic.

The new bridge connects the Shoemaker Center with upper-level parking lots on the Ohio University-Chillicothe campus and replaces the original bridge, built in 1979, that had degraded such that replacement was crucial.

Shoemaker Center, in addition to daily campus-related functions, is heavily used by the Chillicothe community for its walking track, attendance at OU-C men’s and women’s basketball games, various expositions and special events. The parking lot served by the pedestrian bridge provides easy access to the center for those activities.

Geiger Brothers began work last winter with demolition of the current bridge. The base of the new span is foundations setting on auger cast piles poured to bedrock and then precast prestressed steel beams set on the new abutments.

The structural steel and glass serve both aesthetics and as functional safety containment. The 70-foot-long span also includes a steel covering and roof to protect individuals from the elements and reduce the need for deicing.  The laminated glass panels are digitally printed with the campus name and logo.

The bridge is visible from various locations throughout the site. The goal of campus officials was a highly functional span that will serve as a landmark and appealing focal point on campus.

Geiger Brothers prepared and implemented a comprehensive Site Logistics Plan to ensure Shoemaker Center remained fully accessible during the work with normal operations in classrooms, offices, and the gym and wellness facilities. 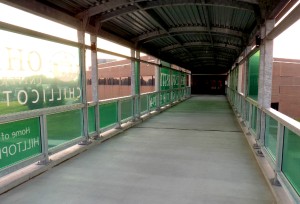